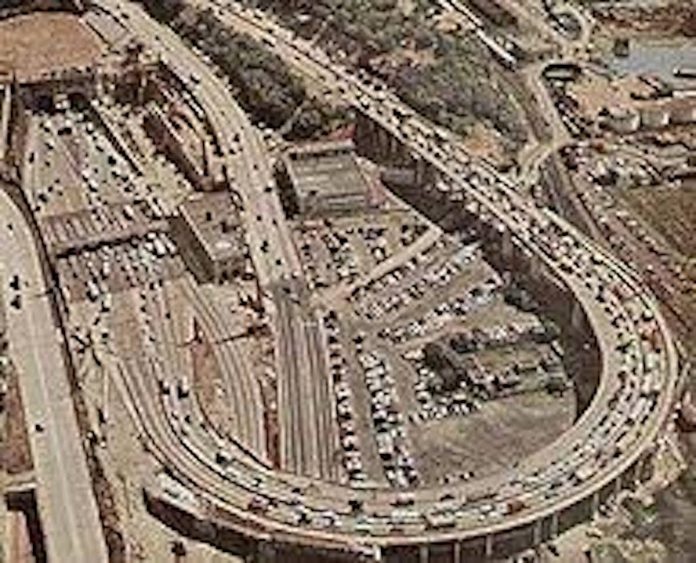 Demolition, Installation of New Pavement to Prepare for Toll Gantries Will Require 1 Weekend of Full Closures in Both Directions at Dyer Plaza Ramp

The Port Authority of New York and New Jersey today announced that preliminary construction work to upgrade the toll collection system at the Lincoln Tunnel to a new, modern system will begin Saturday, November 13, at the Dyer Plaza ramp in New York City.

This work, which is weather dependent, will require one weekend of full closures at the ramp, which provides bi-directional access into and out of the tunnel’s Center Tube, with an alternate start date of November 20 in case of inclement weather.

The installation of the new all-electronic tolling system at the Lincoln Tunnel will require the replacement of the ramp’s existing pavement with new nonferrous concrete slabs. The closures will facilitate the demolition and replacement of the concrete roadway, which is required to prepare for the eventual installation of the induction loop technology that provides vehicle size data for accurate tolling.

The induction loop installation, along with the installation of the gantries that will house toll collection equipment, will occur at a later time once preparatory work such as the new concrete pavement is complete. Altogether, once fully implemented, the new state-of-the-art tolling system will eliminate the need for toll lanes and booths and allows motorists to travel at open road speeds.

“The Port Authority’s installation of all-electronic tolling advances the agency’s core mission to keep the region moving, which now includes the modernization of our existing toll collection system,” said Port Authority Chairman Kevin O’Toole. “This construction work is the first step in upgrading a toll system to better serve all motorists. We ask our customers to bear with us while we move toward a more seamless and faster drive for everyone.”

“As we promised, we are completing the modernization of our toll system to a new, state-of-the-art system at all of our crossings,” said Port Authority Executive Director Rick Cotton. “We strongly urge motorists to plan ahead if they plan to travel to the Midtown Manhattan area by personal vehicle.”

The demolition and replacement of the concrete roadway began in April 2021 and requires a multi-phased construction timeline to allow continuous traffic through the Lincoln Tunnel during the work. The most disruptive phase will close both lanes of traffic on the Dyer Plaza ramp for 52 hours, beginning at 12:01 a.m. Saturday and ending at 4 a.m. Monday.

During the closure, construction will be limited to the Dyer Plaza ramp to allow continued access to and from the tunnel through the other Lincoln Tunnel access ramps. However, due to the expected traffic impact during this construction, particularly on streets immediately around ramp access points, motorists are strongly advised to use alternate routes or public transportation between New Jersey and the Midtown West area in New York City. Buses to and from the Port Authority Midtown Bus Terminal will operate current afternoon peak hour traffic patterns during this work, which is not expected to heavily affect bus traffic.

Traffic enforcement agents and police officers will be stationed at key intersections to redirect traffic during the detours. Digital signage will be provided, and detour information will be disseminated to various wayfinding apps, as well as to impacted communities through outreach to local stakeholders and area transit agencies ahead of the work.

For New Jersey-bound motorists who must use the Lincoln Tunnel during these closures, they are strongly recommended to follow these detours:

For westbound traffic toward New Jersey:

For eastbound traffic toward New York:

The agency completed the transition to all-electronic tolling at the Goethals Bridge, Bayonne Bridge and the Outerbridge Crossing in 2019 and at the Holland Tunnel in December 2020. Toll systems at the George Washington Bridge and the Lincoln Tunnel are scheduled to be upgraded to the new modern system in 2022. For more information on the agency’s modernization project to all-electronic tolling, click here.

For details on the Dyer Plaza ramp work at the Lincoln Tunnel, visit the project website here.

A graphic of the closures and detours is below: 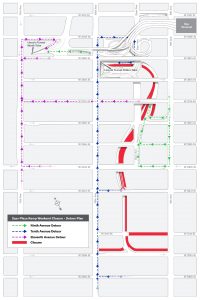 2021 marks the Port Authority of New York and New Jersey’s Centennial Year. The bi-state agency builds, operates, and maintains many of the most important transportation and trade infrastructure assets in the country. Founded in 1921, the agency’s network of aviation, ground, rail, and seaport facilities is among the busiest in the country, supports more than 550,000 regional jobs, and generates more than $23 billion in annual wages and $80 billion in annual economic activity. The Port Authority also owns and manages the 16-acre World Trade Center site, where the 1,776-foot-tall One World Trade Center is now the tallest skyscraper in the Western Hemisphere. The Port Authority receives no tax revenue from either the State of New York or New Jersey or from the City of New York. The agency raises the necessary funds for the improvement, construction or acquisition of its facilities primarily on its own credit. For more information or for updates from the Now Arriving blog, please visit https://www.panynj.gov/blog.