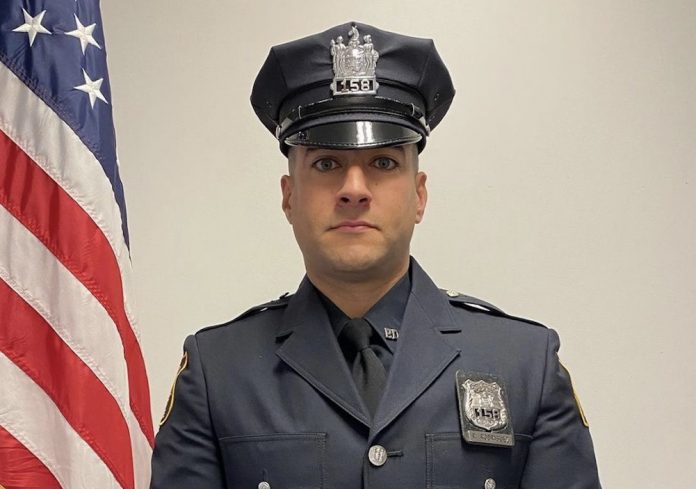 He’s only been a member of the North Bergen Police Department for the past two-and-a-half years, but during that time he certainly has made a name for himself.  This morning his hard work and professionalism was recognized.

In a Facebook post, Police Chief Peter Fasilis and the Command Staff named Officer Richard Rodriguez as the Department’s 2020 Officer of the Year.  During his short time with the North Bergen Police Department, Rodriguez has been assigned to the Patrol Division in Squad 3.  He was twice chosen as Officer of the Month last year, first in January, then in May.

The Facebook post describes Officer Rodriguez as “eager and motivated,” so much so, he has been assigned as a Field Training Officer.

“In January, Officer R. Rodriguez was patrolling the motels on Tonnelle Avenue. He noticed a vehicle fitting the description from an officer safety TRAK Alert. He ran the license plate of the vehicle and confirmed it belonged to a party who was believed to be suicidal and possibly in possession of a firearm. The party was also wanted by other agencies. Officer Rodriguez entered the motel office and confirmed that this party had checked into the motel and was in fact inside the room. The party was taken into custody without incident. Officer R. Rodriguez exhibited vigilance and removed a potentially dangerous party off the streets.”

Regarding the second incident four months later, the Chief and Command Staff stated, “In May, Officer R. Rodriguez responded to an accident where two male parties fled the scene. The video showed one of the parties was in possession of a handgun. Officer R. Rodriguez proceeded to canvas the area and observed two male parties matching the description. The parties separated and were stopped by officers. Officer R. Rodriguez used police investigative techniques and was able to obtain further information from the suspect. The suspect admitted to having a handgun, but stated it was a toy gun. The suspect pointed out the location he discarded the handgun. The handgun was located and collected for evidence. The handgun was determined to have been a CO2 airgun.”

The residents of North Bergen should be extremely proud to have Officer Richard Rodriguez on the beat in their municipality.  His commitment to making the town a safer place for everyone was rewarded today by the highest members of the Department.