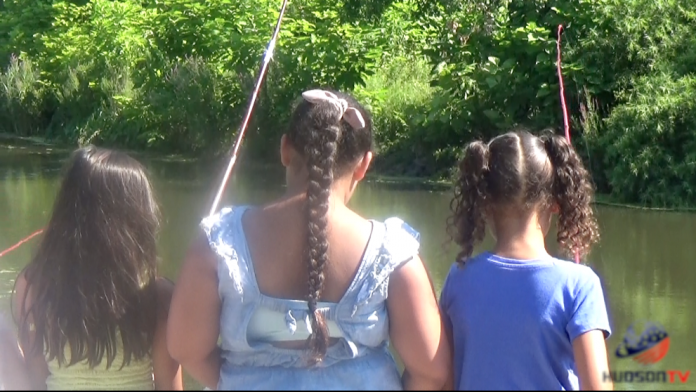 It was a beautiful afternoon on Braddock Park Lake, where township kids from the 2022 Summer Fun camp program had a blast at the fourth annual ‘Cops & Bobbers’ event.

North Bergen Police taught the children to fish, with assistance/and equipment from the US Fish and Wildlife Service.

Their ‘Hooked on Fishing, Not on Drugs’ initiative was established in 2018, as a collaboration between NBPD and the Recreation Department — in order to keep kids off the streets with enjoyable, healthy activities, and build positive relationships with the police.

And that’s exactly what they did.

According to Captain Cynthia Montero, this brings them out of the computer state and into Mother Nature.

“Enjoying basic things of life that sometimes you forget are so critical for children to learn at a young age,” Montero says. “It also brings the opportunity for them to see and be around police.”

The best part about this event is that the kids get a chance to get out and enjoy a local resource by fishing it.

“Many of these kids may not even get on this water and it’s a wonderful resource for them,” says Liz Jackson, NJDFW senior biologist educator. “So to learn about it in one day and then hopefully they are engaged in a way that they want to come back.”

For the North Bergen young people this is something unique.

And one of those rare times to unplug.

“This is an opportunity to take a step back and enjoy the weather,” says the Captain. “It turned out absolutely wonderful.”

Timing is everything and so is perseverance.

“You need to have patience in trying to catch the fish ’cause if you try to get the fish really fast, it won’t really work,” Julius says.

Being comfortable around law enforcement will benefit them now… and later.

“Learning that police are their friends, they could feel safe. Kind of like in a more controlled atmosphere,” says Montero.

The ‘Hooked on Fishing, Not on Drugs’ program encourages school-aged children to avoid substance use by providing alternative activities like learning to fish and developing constructive life skills.

So if somebody is inclined they can start up their own fishing program enabling the kids to keep fishing above and beyond this one day event.

“This year we’re providing bamboo rods so the kids can actually catch some fish. It’s something they can use instantaneously,” Jackson says they are also supporting them with all of the hooks and internal tackle. “Moving forward we would be happy to provide the bait as well.”

What is Julius going to do if he catches a fish?

“If there was someone else but me they would probably bring the fish and then eat them,” says the eight-year-old. “But if I caught a fish I would just release it back so that way it could live.”

There are so many benefits to this event and for the police officers as well.

“We come out and interact with the children that are the future of our community. It’s a win/win on both ends,” the Captain says.