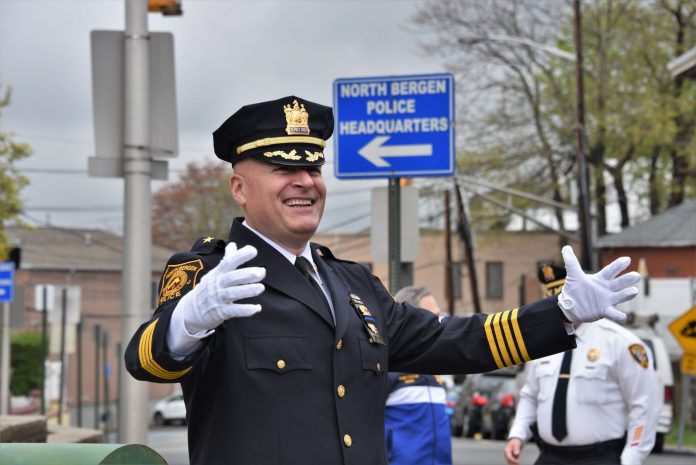 NORTH BERGEN, NJ – North Bergen Deputy Chief Peter Fasilis took the Oath of Office as the 10th Chief of Police in the Township’s history from Mayor Nicholas J. Sacco and Commissioner Allen Pascual today at a private ceremony held in the North Bergen Township Chambers. Due to the ongoing COVID-19 pandemic the ceremony was limited only to Chief Fasilis’ immediate family and designated Township Officials. The Oath of Office Ceremony was streamed live on the North Bergen Police Department’s Facebook page.

“Chief Fasilis has spent his entire adult life serving the people of North Bergen as a member of the NBPD,” said Mayor Nicholas Sacco. “He has the experience and professionalism needed to make a great Chief of Police, the NBPD could not be in better hands than under the leadership of Chief Fasilis.”

“I want to thank the Mayor and Board of Commissioners for their unwavering support,” said Deputy Chief Peter Fasilis. “It is difficult to be in a celebratory mood due to the ongoing COVID-19 pandemic. However, I am incredibly proud of the men and women of this department and how they have handled this crisis. They have been selfless in their dedication to their profession and I am truly fortunate to have the opportunity to lead such a tremendous group of individuals.”

“The entire Board of Commissioners have the utmost confidence that Chief Fasilis is ready to step up and command North Bergen’s finest,” said Public Safety Commissioner Allen Pascual. “Chief Fasilis was instrumental in working with his predecessor to take the NBPD to new heights, we are all excited to see what he will accomplish at the helm.”

Peter Fasilis has earned a Bachelor of Science from the School of Management at Rutgers University and a Master of Science in Criminal Justice from New Jersey City University. In addition he is a Certified Public Manager—having earned his CPM certification from Rutgers University. He is also a graduate of the FBI’s prestigious Law Enforcement Executive Development Seminar (LEEDS). In 2013, Peter Fasilis completed the Executive Leadership Program at Fairleigh Dickinson University.

Chief Fasilis is Accredited as a Command Executive by the New Jersey State Associations of Chiefs of Police. He has studied at the UK’s College of Policing in Manchester, England, the Scottish Police College in Fife, Scotland, and Scotland Yard in London, England. In 2016, Peter Fasilis was invited to the White House to participate in discussions on President Obama’s Task Force concerning 21st Century Policing.