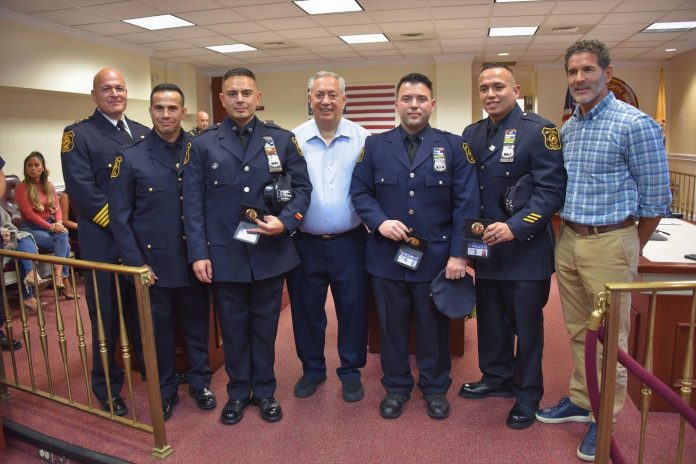 On Friday afternoon in the North Bergen Town Hall Commission Chambers, four members of the town’s Police Department received promotions.  Promoted to the rank of Lieutenant was Christian Argudo,  Receiving promotions to their first supervisory rank of Sergeant, were Jason Solan, Ramon DeJesus and Robert Garcia.

Chief Peter Fasilis announced during the ceremony that the department will be returning to steady shifts, stepping away from rotating shifts, which studies have shown, reduces the life expectancy of a police officer by eleven years.

Before the promotions took place, 95-year old town resident Ernesto Benavides, a Cuban immigrant who came to the United States in 1962 and settled in Hoboken, before moving to Union City and finally buying a home in North Bergen 32 years ago, was surprised by Mayor Nicholas Sacco and the Commissioners with a plaque, honoring him for his recent birthday on October 8th.

It was the first time Benavides had ever met Mayor Sacco in person.  He says he has voted for him every time he’s been on the ballot, and he would vote for him if he ran for President of the United States, an announcement which drew a large cheer and applause from the audience in attendance to witness the police promotions.