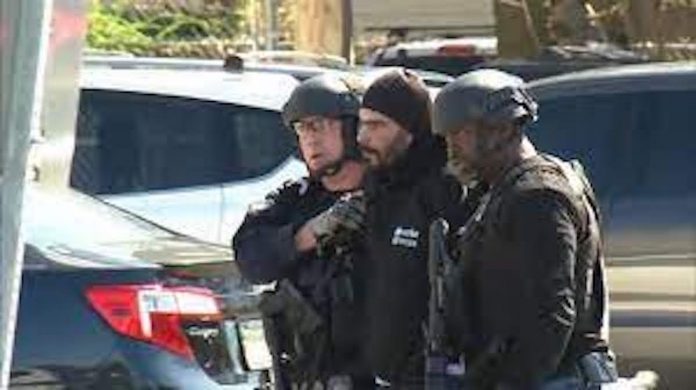 An incident which began around 10:45 this morning in Jersey City, near the corner of Clinton Avenue and JF Kennedy Boulevard, ended without anyone getting hurt  approximately four hours and thirty minutes after it began, when Jersey City Police took a man who was barricaded in a car into custody.

The as yet, unidentified man, had barricaded himself inside of a vehicle, reportedly armed with a weapon and allegedly wanted for a robbery in North Bergen.  North Bergen Police reportedly were in Jersey City this morning in order to place the suspect under arrest.  As of this writing, it has not been confirmed if the man was armed, as police were awaiting a search warrant for the car.

According to Jersey City spokeswoman Kimberly Wallace-Scalcione, the incident was never a hostage situation.  Jersey City Police Director Tawana Moody credited the negotiation efforts of the police for successfully, and peacefully, bringing an end to what could have been a very different outcome.

Multiple streets in the area were shut down as police surrounded the car, which was parked near the 7-Eleven on JFK Blvd., just off of Communipaw Avenue.

Numerous media outlets are reporting that the suspect was wanted for committing an armed robbery in North Bergen.