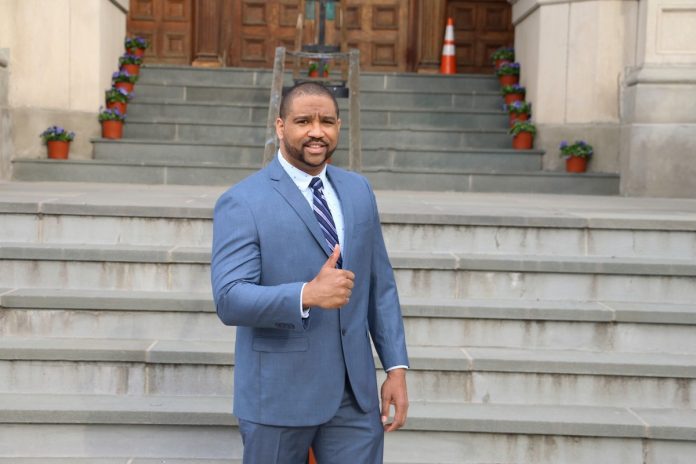 Backed by the Hispanic American Commerce Association, political activist and long time resident, Elvin Dominci, will run for Jersey City Council-at-large in the 2021 Jersey City Municipal Elections as an independent.

“As the largest Small Business Association within Hudson County and over 300 businesses owners/members within Jersey City, HACA’s executive board has voted to participate actively in the political elections in Jersey City and Hudson County in order to advocate on issues that are effecting the local small business market . Through DPA we plan on endorsing Elvin Dominici as he runs for Councilman At Large in the upcoming November 2, 2021 Municipal Election. We believe in his unquestionable track record in helping our community and small businesses”.  said HACA’s President Luis Jimenez.

Dominici is a Latino born and raised in the Dominican Republic who immigrated to the USA at the age of 21 years old. He works in the Custody Middle Office as a Senior Associate in JP Morgan Chase in Brooklyn, New York. Dominici started his education in ESL level one in Hudson County Community College (HCCC) in 2000. Later graduating with a Bachelor’s Degree in Finance from New Jersey City University (NJCU) in 2006 and finally obtained two masters degrees (MBA & MS) Accountancy from Saint’s Peter University in 2009. In addition, Dominici has self-published two books Flor de los Deseos and Black Rose, the latter being based on the struggles of his mother’s journey to reach America.

Additionally, Elvin has been involved in several local campaigns; served as a member of the Jersey City Immigrant affairs Commission in 2017; organized rallies in Journal Square in support of Immigration Reform; and has been the elected Democratic Committee representative for Ward D District 8 since 2016.  Elvin has also spearheaded several local initiatives such as post Hurricane Sandy Cleanups and advocating for traffic lights at various locations in support of pedestrian safety.

“Jersey City is my home and where my children and family live. There are many issues that are affecting our residents. We are tired of lies and the council members who are aligned completely with the city government’s agenda without holding the administration. There are council members who have failed this city and our residents in their duty to advocate for our quality of life. Our residents deserve accountability and the only way for that to happen is to elect independent candidates for City Council that will keep the administration’s agenda in check” said Dominici.

In 2015, Dominici actively participated in the work for the foundation of the Hispanic American Commerce Association (HACA).  He was the main speaker advocating for HACA during the Latino Business Symposium in the City Hall with the participation of hundreds of small businesses in order to address concerns on issues that include lower crime activity near small businesses, understanding the city inspection process, and educating businesses on available grants.

“Despite the fast growth of Latino community, specifically the small business owners, I strongly believe there is a need for Latino leadership in city hall. This is the main reason HACA has established the DPA as our political arm and we are heavily supporting the candidacy of Elvin Dominici as a councilman at large in the coming November 2nd municipal election. I believe very strongly this is Dominici’s time and we are going to win for sure.” said Hipolito Ovalles, former HACA president.

“Jersey City is the most diverse city of NJ and also it is the most important because many multinationals have located their operations here. However, the Latinos and different minorities are the true backbone of this city even more than these multinationals as we are the biggest contribution in taxes. We are the faces of our communities as owners of groceries stores, beauty salons, barbershops, mechanics shops, restaurants, etc.  I am supporting 100% and I will work very hard to get Elvin Dominici elected. It is time to bring Dominici to the city council who is a proven allied and good representative to our minority communities”. Said Political Activist Ramon Veloz.