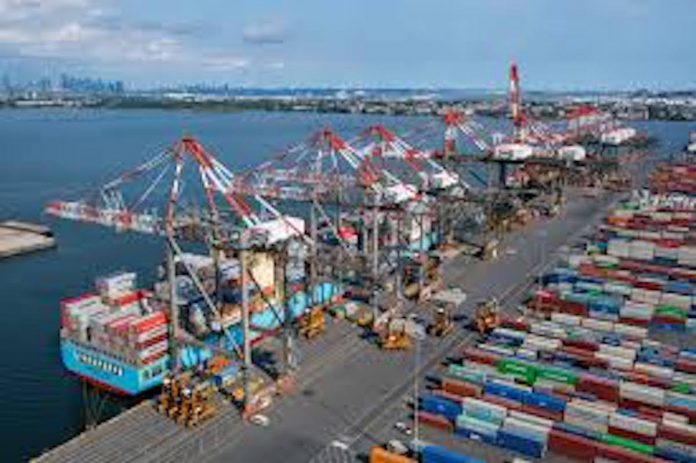 It’s the lifeblood of commerce and business in the New York Metropolitan Region.  The Port of New York & New Jersey is now listed as the second largest container port in the United States according to a newly released study by the New York Shipping Association.  Bayonne, Newark, Elizabeth…all part of the engine which makes the American economy thrive.

Half a million jobs.  $12 billion in tax revenues.  All generated by the millions of containers which arrive beneath the Bayonne Bridge from ports far and wide, both domestic and international.  Goods and services, products of all kinds, arrive and depart by train, truck or other means for destinations across America.

More details are provided in the following press release:

The Port Industry of New York and New Jersey accounted for nearly $12 billion in tax revenue, supported over 500,000 jobs, and was responsible for $36.1 billion in personal and $99.5 billion in business income in the region in 2019, according to a new economic impact study released on Tuesday by the New York Shipping Association.

Supported by nearly $2.9 billion in recent infrastructure investment — including the raising of the Bayonne Bridge — the Port of New York and New Jersey has become the second largest container port in the United States and has been repositioned to meet 21st century needs, including new larger neo-Panamax vessels, according to the study conducted by the North Jersey Transportation Planning Authority. The study looked at the port’s impact on a 31-county region in New York, New Jersey and Pennsylvania. It also provides data on the economic impact to the entire states of New York and New Jersey.

“The NJTPA focuses on maintaining and improving infrastructure for all users, including the roads and rails that keep freight moving through the region,” said NJTPA Chair Kathryn DeFillippo, a Morris County Freeholder. “This report highlights the impact those investments have on our region’s economy, including supporting more than 100,000 new jobs since 2016.”

According to the study, the port industry currently employs 239,100 workers and supports another 267,250 indirect jobs — a 26 percent increase in total supported jobs since 2016. Container volume has also increased by more than 1 million additional containers, or 19 percent, since 2016.

“In addition to the indisputable statistics through 2019, the pandemic has highlighted for the nation what we have always known – our supply chain is the lifeline of the economy and we must keep it working efficiently,” said John Nardi, President of the New York Shipping Association. “The public and private investments that have modernized the Port of New York and New Jersey into a national leader have proven their worth by supporting our region through more jobs and tax dollars than ever and by sustaining the efficient movement of goods at a critical time.”

The Port experienced a nearly 25 percent growth in cruise vessel calls since 2016. In addition, the region’s industrial and distribution space increased by tens of millions of square feet of capacity between 2016 and 2019, with more under construction.

As a result of this growth, the region’s maritime facilities handled:

“The Port of New and New Jersey supports tens of thousands of direct and indirect jobs each year while ensuring the region’s supply chain remains intact and fluid to keep commerce flowing for thousands of businesses and much-needed supplies available to millions of residents,” said Sam Ruda, Port Director of the Port Authority of New York and New Jersey. “Keeping the port fully operational as an essential business designated by the federal and state government and supporting these jobs – including the 100,000 new jobs created in the past three years – is even more important now during this period of economic uncertainty.”

From 2014 to 2019, public agencies and private port operator investments in the Port totaled nearly $2.9 billion, including raising the Bayonne Bridge and improvements in terminal buildings and berths, cargo handling equipment, intermodal rail infrastructure, roadways, and more. The total one-time economic impact of these investments was:

If you were wondering, the Port of Los Angeles remains the top ranked container port in North America.  The Port of New York & New Jersey overtook Long Beach, California for the second spot.

About the New York Shipping Association

New York Shipping Association (NYSA) is a membership organization comprised of the ocean cargo carriers, terminal operators, stevedores, and marine-related businesses that operate the ships, move the cargo, train and employ the laborers, provide and maintain the equipment, that moves more than $200 Billion in products to and from the largest and richest consumer market in the world. NYSA negotiates the collective bargaining agreement with the International Longshoremen’s Association and the Port Police and Guards Union. For more information about the study, please visit http://nysanet.org/wp-content/uploads/2020_NYSA_Economic_Impact_Study.pdf and follow us on Twitter @NYSANEWS.

The NJTPA is the federally authorized Metropolitan Planning Organization for 6.7 million people in the 13-county northern New Jersey region. Each year, the NJTPA oversees more than $2 billion in transportation improvement projects and provides a forum for interagency cooperation and public input. It also sponsors and conducts studies, assists county planning agencies and monitors compliance with national air quality goals.