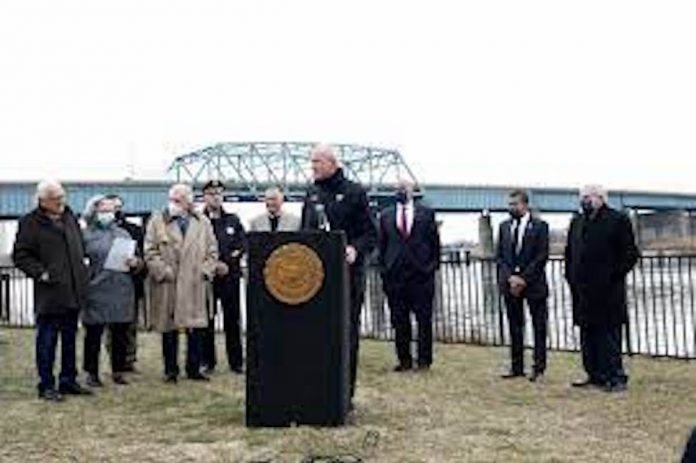 During a press conference held Tuesday at the foot of the Route 3 eastbound bridge over the Hackensack River, Governor Phil Murphy was joined by United States Senators Bob Menendez and Cory Booker, along with Congressman Bill Pascrell and municipal officials including Secaucus Mayor Michael Gonnelli in announcing plan to replace the bridge using federal, infrastructure bill funding.

The bridge is just one example of the many infrastructure projects which need to be fixed or replaced in the state of New Jersey due to age, wear and tear and potentially unsafe conditions.

Here is the press release, including the video of the press conference, issued last night:

SECAUCUS, N.J. – U.S. Senators Bob Menendez and Cory Booker (both D-N.J.), Congressman Bill Pascrell, Jr. (N.J.-09) and Governor Phil Murphy have announced a $143.6 million project to rebuild the eastbound span of the Route 3 bridge over the Hackensack River, ensuring the bridge is safer for travelers. The federal lawmakers secured this funding in the $1.2 trillion bipartisan Infrastructure Investment and Jobs Act that was signed into law in November.

“The Infrastructure Investment and Jobs Act is the largest investment in America’s bridges since the creation of the federal highway system. And boy do we need it. Throughout New Jersey we have about 500 bridges in a state of disrepair – including the Route 3 bridge behind us today,” said Sen. Menendez. “The Infrastructure Investment and Jobs Act will unleash American ingenuity and help us build a more resilient, more sustainable, and more productive economy.”

“From providing funds to clean up toxic Superfund sites, replace lead pipes, and now repair our state’s crumbling bridges, the bipartisan Infrastructure Investment and Jobs Act is positioning New Jersey to build a stronger economy that will help us to recover from this pandemic,” said Sen. Booker. “This investment into our bridges will allow our country to be more competitive globally, build a 21st-century transportation system, and create jobs that will bolster the entire economy. I was proud to vote for the bipartisan infrastructure bill and am grateful for the partnership between federal, state, and local officials that will see these funds distributed to urgent projects that will make an immediate impact in the lives of New Jerseyans.”

“When they put the finishing touches on the Route Three Eastbound, FDR was still in his first term. The Westbound was completed under JFK. Between these two bridges alone is 147 total years of wear and tear along one of the busiest commuter arteries in the Western Hemisphere,” said Rep. Pascrell. “Today we finally have a Governor, a President, and a Congress who are simultaneously committed to rebuilding our bridges. The $124 Million project we are announcing today is the direct fruit of action by our Democratic Congress. Paired with the major Gateway Tunnel milestone we recently achieved, the investments we are announcing today will make sure that the travelers moving on these roads won’t lose an extra minute of their lives.”

“Senator Menendez, Senator Booker, and our Congressional delegation have been relentless and persistent advocates for infrastructure investment,” said Gov. Murphy. “With their support, and the leadership of the Biden Administration, we are finally beginning to see critical infrastructure funding come through from the Infrastructure Investment and Jobs Act. The Route 3 bridge between East Rutherford and Secaucus is one of many projects that will benefit New Jerseyans due to this historic effort. The IIJA will provide significant funding and support for years to come as we revamp roads and bridges throughout the state.”

The U.S. Department of Transportation announced earlier this month that New Jersey will receive $229.42 million in FY22 from the infrastructure bill to help repair 502 bridges across the state, including the Route 3 bridge, that are considered in poor condition according to the Federal Highway Administration. Over the next five years, New Jersey is expected to receive a total of $1.147 billion in bridge formula funding from the bipartisan bill.

This Route 3 bridge was built in 1934 and over 150,000 vehicles drive over the bridge every day. Over the years, a number of repairs and emergency work has taken place to ensure the bridge’s viability, but this has also caused congestion along an already heavily travelled route into Manhattan. This project would completely replace the eastbound bridge, which will improve safety, reliability and sustainability. The replacement would be built north of the existing bridge, causing minimal disruption to the flow of traffic. The new bridge would also be raised to accommodate marine traffic according to the U.S. Coast Guard’s standards.

“As New Jersey works to build and repair its aging transportation infrastructure, we will also be creating and supporting jobs,” said Raymond M. Pocino, vice president and eastern regional manager of the Laborers’ International Union of North America (LIUNA).” According to Federal Highway Administration, the Route 3 Bridge alone would support 1,859 jobs both within and outside of the construction industry. The additional $1 billion of bridge work secured by our Congressional delegation will create another 13,000 jobs which means the Infrastructure Investment and Jobs Act not only strengthens infrastructure, it strengthens families and communities.”

The Bipartisan Infrastructure Investment and Jobs Act includes an incentive for states to direct the new Bridge Formula Program funds to off-system bridges owned by a county, city, town or other local agency. While states generally must match federal funding with up to 20 percent state or local funding, the guidance issued this month notes that federal funds can be used for 100 percent of the cost of repairing or rehabilitating such locally owned off-system bridges.

In December, Sens. Menendez and Booker announced $54 million from the infrastructure bill to support New Jersey’s airports. While at Bloomfield Rail Station in November, the senators outlined how the bill will improve the state’s overall infrastructure.