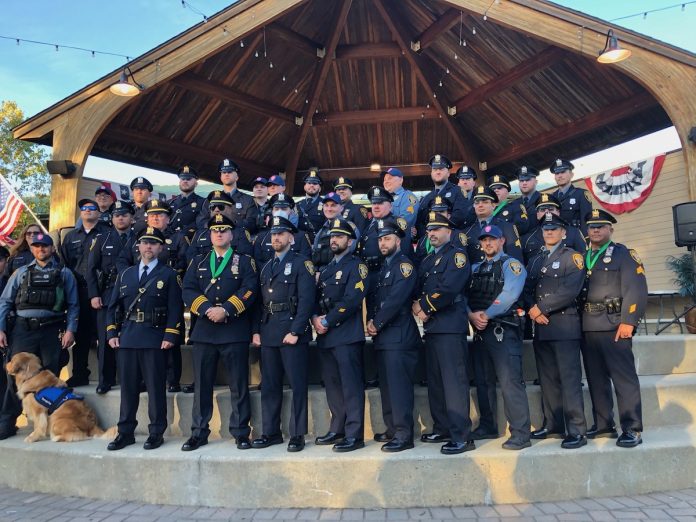 For the first time in at least four years, the Secaucus Police Department held an awards ceremony on Thursday afternoon at Buchmuller Park to honor members of the force for their excellent, and in many instances, courageous police work.  The ceremony was the idea of Chief Dennis Miller, who wanted to recognize officers for going above and beyond, and exhibiting the true spirit of selflessness by protecting the residents of the municipality.

During the hour and a half long ceremony, more than 100 awards were handed out in front of a crowd totaling around 50 or more family members, friends and fellow law enforcement personnel.  The awards ranged from Excellent Police Service, to Life Saving Awards and Unit Citations, to Medals of Honor.

The Chief made sure to include retired police personnel as part of the ceremony, honoring ten or so former members of the Department who had not been given recognition upon their retirements.  A large plaque with the retired officers names is going to be placed in Police Headquarters to recognize the service and careers of the retirees.  As future officers hang it up after their careers come to a conclusion, their names will be added to the plaque, so, as Chief Miller put it, “their service to the Secaucus community will never be forgotten.”

At the end of the ceremony, special recognition was given to Chief Miller by the police union and Mayor Michael Gonnelli and the Town Council for something the Chief did 15 years ago when he was a detective.  The Chief, who was completely surprised and speechless, was presented with an award and a plaque from a surviving victim whom he helped to save from a man who had just murdered her friend.

It was clear that Chief Miller had absolutely no idea that was going to happen.  Some tears were shed.

Congratulations to all of the members of the Secaucus Police Department for their daily commitment to protecting the residents of their community, and to Chief Dennis Miller for making the decision to bring back the awards ceremony.