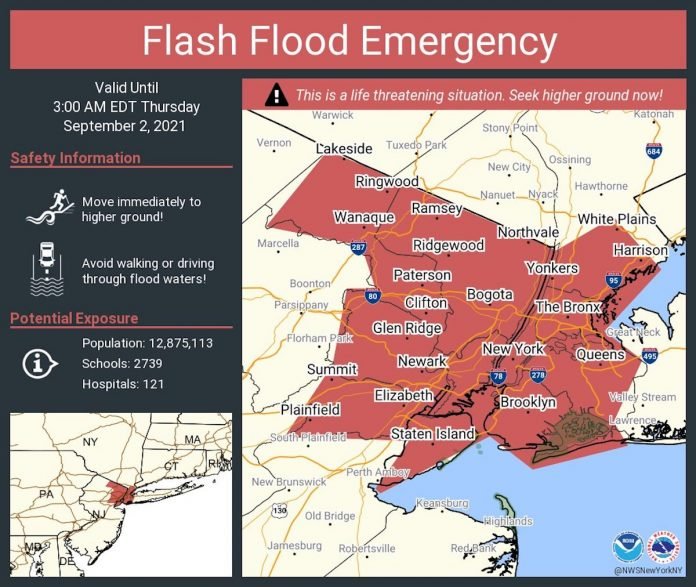 Hudson County felt the wrath of Mother Nature throughout night on Wednesday, as the remnants of Hurricane Ida passed through the northeast, dumping rain by the bucket full and causing severe flooding countywide.  Heavy thunderstorms, lightning and high winds were the norm all across Hudson County.

The amount of rain caused flash flooding and even resulted in the City of Hoboken declaring a State of Emergency with a stay at home order put in place overnight.  The National Weather Service had a tornado warning in place for a good portion of the metropolitan region for a large part of the night.

The Office of Emergency Management has declared a State of Emergency due to ongoing heavy rainfall causing substantial flooding in Hoboken. Residents are instructed to stay at home and shelter-in-place,” said a statement from the City. “All non-emergency vehicles are to remain off the roadways. Non-essential vehicles on the roads will be issued a summons. NJ Transit bus service is suspended until further notice.”

New Jersey Governor Phil Murphy declared a State of Emergency as well.  “I’m declaring a STATE OF EMERGENCY EFFECTIVE IMMEDIATELY in response to Tropical Storm Ida. We will use every resource at our disposal to ensure the safety of New Jerseyans.”

Tornadoes were reported in South Jersey east of Philadelphia.  A confirmed tornado was delcared in Mullica Hill in Gloucester County.  News 12 was awaiting for confirmation as to whether it was the strongest tornado to ever touch down in New Jersey.  The flash flood emergency was in place from the National Weather Service until 3 o’clock this morning for Hudson County.  Jersey City and Bayonne also were expected to suffer flooding overnight. Roads and streets around Hudson County were, in many instances, dangerous and not passable.  At 5:30 am the Bayonne Office of Emergency Management reported that Route 440 was still flooded and not passable, but many other city streets had seen flooding subside.  Still, Mayor Jimmy Davis is advising everyone to avoid unnecessary travel. 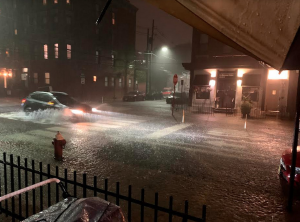 As for travel conditions into Manhattan during this morning’s rush hour, as of 5:30 the Port Authority tweeted that the PA Bus Terminal may be experiencing residual delays due to the adverse weather.   Commuters were advised to check with local carriers for updated service information.

As of 5:30 this morning, All NJ TRANSIT rail service, except the Atlantic City Rail Line, remains suspended on Thursday due to the storm impacts. Newark Light Rail & Hudson Bergen Light Rail service are also suspended.

If you don’t need to leave your homes, stay inside.