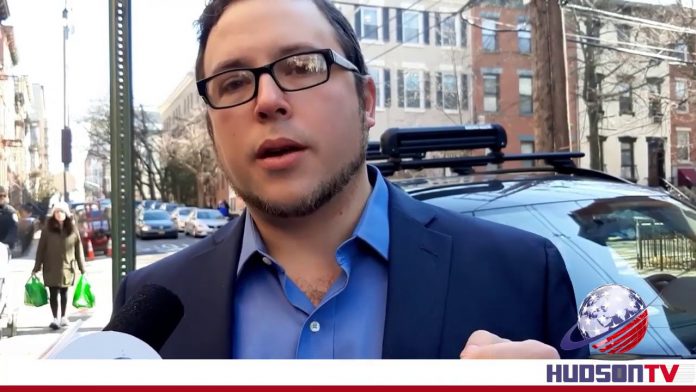 The following is an Op Ed submitted by Joshua Sotomayor Einstein, the New Jersey GOP State Committeeman representing Hudson County who is seeking the Chairmanship of the Hudson County Republican Party:

The dozens and dozens of Coptic (Egyptian Christian) and Muslim Jersey City residents who attended the January 30th Jersey City Board of Education meeting to protest the pushing of the gender identity agenda on children as young as 11 years old were not only correct to do so, but are standing up for all New Jersey residents. Teaching children that they can self-select to be the opposite sex when they suffer from no chromosomal nor physiological abnormalities has and will continue to have lasting negative effects.
An extension of, and worse than the participation trophy culture, children are being taught that if they say they feel a certain way, than despite the facts to the contrary, they are that way. Adding insult to actual lifelong injury, is the fact that the gender identity movement undoes the rightful victory of the feminist movement in prodding society to acknowledge that most differences between women and men are social constructs not biological facts. Sex based presentation behaviors that the feminist movement had successfully argued were learned and not inherent to the chromosomal and physiological differences between the two sexes are, under the gender identity agenda, forced back into one of the two sex stereotype based silos (women’s and/or men’s behavior).
Moreover, the mythology of the gender identity agenda puts in danger lesbians and gay men, as heterodox sexual identities are being pushed back inside one of the two sex specific boxes. Many butch (those who engage in “masculine” behavior) lesbians are assumed to have “transitioned”, ie mutilate their perfectly healthy bodily organs and taken hormones to change themselves to conform to societal
expectations or are asked when they are doing so. Worse, for gay men, their sexual orientation coupled with their biological, chromosomal, and physiological normality has been seen as such a threat by some (very insecure) regimes, such as the Iranian theocracy, that government pays for “gender reassignment” surgery to “transition” men into becoming “women” because doing so reaffirms stereotypical sex based
“gender” roles. The only other legal option gays have in Iran is capital punishment – death.
There is nothing wrong and everything good in teaching the history of inventors, explorers, leaders, and others who have made contributions to society worthy of historical note and who happen to be gay, lesbian, or otherwise heterodox in their sexual orientation. Nor is there anything wrong, in the context of global history education, with teaching students the places and times in which same sex and other
heterodox relationships were celebrated as well as when historical figures (for example Alan Turing) were persecuted for their sexuality. No one believes that a student may become a polygamist because in their world history class they learned of ancient polygamous societies, that one would decide to have many wives after learning that the monarchs of ancient Israel often did, or that when studying Islam’s last prophet Mohamed that a male student is going to marry four women. Nor do those who oppose
what is being passed off as merely gay and lesbian inclusive education, think children will become gay by learning about same sex relationships in ancient Sparta or America’s first out of the closet gay elected official, Harvey Milk.
Despite the falsehood pushed by the Jersey City school board that they are powerless to prevent the government sanctioned proselytization of the gender identity agenda, the reality it is that while state law has mandated LGBT “inclusive” education, it is up to each school district to choose and implement the curriculum. The concern is that while no student will become straight or gay because of what they learn in school, students may fall victim to the popular mythology that the average person, with no chromosomal or physiological issues, can choose to become the opposite sex irreparably damaging students for decades to come and completely erasing “tom girls”, effeminate straight men, lesbians, gays, and the feminist movement for women’s equality.
The Coptic and Muslim protestors who spoke at the Jersey City Board of Education meeting are not alone. Millions of New Jerseyan’s and tens upon tens of millions of people across the country – moderate Democrats, independents, and Republicans; new Americans and those whose roots go back hundreds of years; men and women; Muslim, Hindu, Christian, Jew, atheist and more; black, brown, and white; gays
and straights – understand that that the pushing of the gender identity agenda by a radical ideological minority is not education but rather is about indoctrination and has no place in any classroom.
​