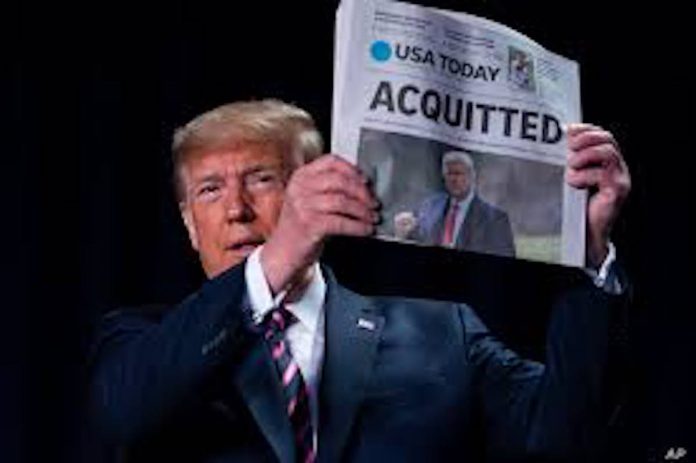 The United States Senate this afternoon, voting mainly along party lines with just seven Republicans voting to convict, failed to get the necessary two-thirds supermajority vote needed to impeach former President Donald Trump for incitement of insurrection for the January 6 siege on the United States Capitol.  The final vote was 57 guilty, 43 not guilty…acquitted for the second time.  The Senate needed 17 Republicans to vote for conviction for the impeachment to stand.

The Senate trial lasted five days, as the debate focused on whether the former President’s words led to his supporters marching to the Capitol and storming their way inside as Congress was in the process of certifying the electoral votes formalizing Joe Biden’s presidential victory.

Reaction to the acquittal was fast, with Democrats from New Jersey and Hudson County weighing in.  As expected, senior Senator Bob Menendez did not mince his words, stating, “Today, I voted to convict President Donald J. Trump for inciting an insurrection against the United States. The proceedings of this trial made clear that President Trump spurred a violent attack on Congress and then betrayed his duty as Commander-in-Chief by failing to deploy the National Guard to aid the Capitol Police and save American lives.

“President Trump’s clear and stated motive was to overthrow a free and fair election in a desperate attempt to cling to power. For weeks, he used malicious lies and conspiracy theories to foment anger and mobilized his supporters to descend on Washington in a last-ditch effort to ‘stop the steal.’ Then, on January 6th, as Congress gathered to carry out our constitutional duty, he rallied his angry mob to fight on his behalf and stop the certification of the election results.

“Our nation paid a heavy price for the lies President Trump spread so freely. Seven people lost their lives, including a Capitol Police officer from New Jersey; scores suffered serious injuries and many will carry unseen scars with them for years. We also learned that the President’s mob came perilously close to harming Vice President Pence and his family and members of the House and Senate, and that extraordinary heroism by law enforcement prevented more tragedy.

“The House impeachment managers also made abundantly clear that President Trump could have quickly acted to save lives and defend the Capitol, but instead spent hours basking in the chaos unfolding in his name. I cannot think of any higher betrayal of our Constitution and dereliction of duty by a Commander-in-Chief than refusing to act to save American lives.

“President Trump’s behavior was unforgivable, and his own lawyers failed to mount any compelling defense. All we heard from his team were dangerous arguments that, if indulged by the Senate, would give every future outgoing President permission to use their final weeks in office to commit gross abuses of power without accountability.

“To vote for conviction and disqualification from serving should not have been a difficult decision for any member of the Senate, of any party.

“I am dismayed that so many Senate Republicans chose to put the fleeting politics of the moment ahead of their sworn oath to protect the Constitution of the United States. In private, they complain about feeling trapped by President Trump’s poisonous grip on the Republican Party and yet refused to free themselves by voting to bar him from running for future office. This is pure political cowardice and I fear their refusal to hold Donald Trump accountable will have lasting negative and even dangerous consequences for the future of our country.”

Congressman Albio Sires (D – District 8) also criticized Republicans for voting to acquit, saying, “On January 6th the Capitol was attacked in an effort to usurp the results of free and fair elections and tear down our democratic institutions. Former President Trump is responsible for pushing conspiracy theories, protecting white supremacists and hate groups, lying to the American people, and inciting this violent insurrection that has left a trail of death and injury in its wake. Today’s vote, while falling short of the needed threshold to convict, shows that a bipartisan majority believes Donald Trump is guilty of high crimes and misdemeanors against the U.S. government. The former President’s refusal to take any responsibility or uphold his oath of office prove that he is unfit to hold such office. I will never forget the events of January 6th, the result of years of Trump’s lies as he stoked division and hatred, and I’m disappointed that so many GOP Senators chose to ignore the damage he has done to our democracy.”

Senator Cory Booker stated, “The death, carnage and destruction at our Capitol was a despicable assault on our democracy, our values and our common humanity. Donald Trump incited this mob and watched it with delight.  Today 43 Senate Republicans refused to hold Trump accountable. They chose to do nothing.”

Finally, Senate Minority Leader Mitch McConnell of Kentucky, who voted not guilty because  he doesn’t believe the Senate has the Constitutional power to convict a former President, stated Trump was “practically and morally responsible for provoking” the attack on the US Capitol.

25 Jersey City students who were riding on a school bus this morning, are being evaluated after the bus struck a parked vehicle on Kennedy Boulevard. According to dailyvoice.com, the incident happened at around 10:20 when the bus reportedly struck the vehicle at the corner of Kennedy Boulevard and S...
View on Facebook
· Share
Share on Facebook Share on Twitter Share on Linked In Share by Email
View Comments

There's an old saying....only other people win the lottery. Well, check your Jersey Cash 5 ticket if you purchased it in Lyndhurst at the Stop & Shop for laat night's drawing. It's worth more than a millions bucks!!! ... See MoreSee Less