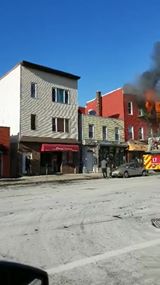 Bayonne Fire Chief Keith Weaver announced on Friday that Thursday afternoon’s, two-alarm blaze in a multi-unit, three-story structure on Broadway has left 19 residents homeless.  Thankfully, no injuries were reported in the fire, which the Chief says began on the top floor and resulted in massive damage to the building.

Working to battle the raging inferno in severely cold conditions, firefighters arrived at 247 Broadway at approximately 1:20 and were able to contain the fire within 40 minutes.  Damage was contained to the building, although an adjacent structure did sustain heavy water damage and Bayonne’s Building Department, following an inspection of the site, has ruled that the fire building will have to be torn down.

Weaver released a statement saying that in addition to the 19 people left homeless, 3 from the building next store have been temporarily displaced.  There is no word as of yet as to the cause of the fire.

City spokesman Joe Ryan told Hudson TV that officials are working with the displaced individuals to find temporary housing.  Last night, one family stayed with friends, while two others spent the night at the City Line Motel.

Mayor Jimmy Davis has announced that the city is accepting gift cards for the families in the Mayor’s Office.  The Mayor and Board of Education are also making arrangements to hold a fundraiser in the near future to help out the victims of Thursday’s fire.  Details are pending.