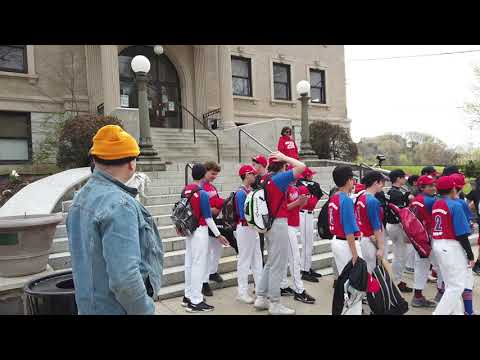 It’s an annual tradition in the township of Weehawken and Saturday’s gloomy start didn’t impact the enthusiasm of the crowd as Weehawken’s Recreation Department hosted the official opening day of the 2022 season for the Cal Ripken and Babe Ruth baseball and softball leagues.

The April 23 ceremony got underway just before 10 a.m., with the traditional parade of teams making their way into the newly refurbished Weehawken stadium.

Mayor Richard Turner joined Weehawken council members and others for the festivities.

In addition to marking the start of the season, Saturday was also part of an ongoing autism fundraising effort by the Weehawken High School Athletic Department in recognition of National Autism Awareness Month.

The campaign began on the weekend of April 16 and 17, with the money raised from the girls softball tournament dedicated to the nonprofit Parents of Autistic Children.

On Saturday Weehawken High School kicked off the baseball tournament, facing off against Wallington High School. The funds from that game and all others that were played over the April 23-24 weekend benefited the Teamwork Unlimited Foundation.

The combined two-weekend effort raised over $8,000. Hudson TV’s Sherry Karabin attended the opening day ceremony and has the following report.