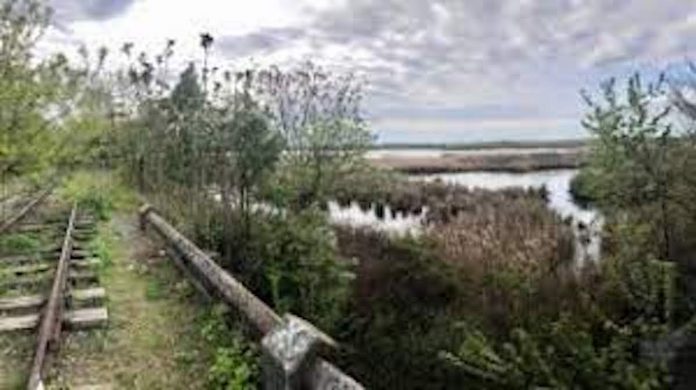 During a press conference earlier today, New Jersey Governor Phil Murphy announced the state’s intention to purchase nine miles of abandoned railroad track and property stretching from Jersey City to Montclair in order to create the first, new state park in New Jersey in fifteen years.  The announcement comes after years of public support from numerous groups wanting to see the former Boonton rail alignment transformed into “a multi-modal transit and recreational trail corridor that crosses above both the Passaic and Hackensack Rivers.”

The project will connect the communities of Montclair, Glen Ridge, Bloomfield, Belleville, Newark, Kearny, Secaucus, and Jersey City.  The park will also provide a new, pedestrian route and protect the environment by providing residents with a new and convenient method to reach their destinations without the use of a car. Projects like the new park, which encourage car-free transportation, will help the Murphy Administration reach its goals of reducing overall emissions by 50 percent by 2030 and 80 percent by 2050.

During his remarks, Governor Murphy stated, “This project has been years in the making, and I am proud to be the Governor to advance this dream to being a reality.  This new park will be a crown jewel of our state park system, providing much-needed recreational space to New Jerseyans and out-of-state visitors, while revitalizing and protecting environmentally-sensitive areas. Residents of our state’s two largest cities, and the suburbs beyond and in-between will benefit from access to a multi-use trail, and the natural beauty of the Meadowlands. I am grateful for our partners across government including in the Legislature, Essex and Hudson counties, and our federal delegation for their efforts in support of this project.”

Outgong Assemblyman Nicholas Chiaravalloti of Bayonne stated, “After years of effort, This vitally important project has reached a historical moment.”  Assemblywoman Eliana Pintor-Marin added, “This project is environmentally friendly, aims to improve water infrastructure and creates recreational opportunities for area residents. It is our sincere hope that JBOC approves the funding for this critical initiative.”

”I am happy to see this project moving forward and thank Governor Murphy for his commitment to creating new green space for New Jersey families,” said Senator Bob Menendez. “The Essex-Hudson Greenway will not only create vital recreational opportunities for many of our communities, but also provide transportation alternatives that go beyond the car and reduce our reliance on fossil fuels. Utilizing both state and federal funds, this project brings all levels of government together to improve the quality of life for area residents. This recreational space will connect suburban and urban communities and bring families of all backgrounds together, while reducing harmful emissions in the region.”

“The Essex Hudson Greenway project is another example of investing in our state’s infrastructure to revitalize old, unused sites for the benefit of our state’s residents and to advance environmental causes,” said Senater Cory Booker. “The renovated corridor will help pave the way for future public transportation options between Essex and Hudson counties, lead to the construction of walkways and bike lanes, and crucially, assist with stormwater management. I am glad to see various state funding sources being leveraged to back this project and look forward to seeing the benefits it provides to New Jerseyans.”

Congressman Albio Sires of West New York added, “I’m thrilled that this abandoned rail line will become a new state park for the people of New Jersey to enjoy.  I have long been an advocate for revitalizing old infrastructure and giving it new purpose as parks, trails, and eco-friendly travel routes. I applaud Governor Murphy’s commitment to making progress on this project and look forward to visiting our new state park with my fellow New Jerseyans.”

“My colleagues and I at the Department of Environmental Protection are proud to support the funding, acquisition and development of this new Greenway for the Garden State,” said Commissioner of Environmental Protection Shawn M. LaTourette. “This is a historic investment that will enrich communities in Essex and Hudson counties, the state and the region—serving as a hub for ecotourism and unlocking the potential for even greater transit and environmental infrastructure improvements. It is exactly the kind of transformative project that New Jersey residents deserve.”

“NJ TRANSIT and the Open Space Institute have been working together for more than a year to ensure the Boonton Line will become a wonderful outdoor experience for walkers, runners and bicyclists, while also preserving the potential for environmentally-friendly public transit in the future,” said NJ TRANSIT President & CEO Kevin S. Corbett. “Greenways and smart, clean public transit are vital to the quality of life in New Jersey, and I’m proud that our continued partnership will assure that these critical needs, for green space and green transportation, will have the opportunity to be fulfilled together.”

“Without question, this deal underscores all the merits of public-private partnerships and strategic land protection in one package.  The Greenway project will make it easier for millions of people to enjoy the benefits of being outdoors, completely transform the way communities connect with nature and connect with each other, linking people to parks, waterways, and their neighbors – all while creating alternative transportation options, improving water quality, and spurring economic activity,” said Open Space Institute President and CEO Kim Elliman. “Thanks to Governor Murphy, this once-in-a-generation opportunity will soon become reality and OSI could not be prouder of the role we played to negotiate the deal, bring stakeholders together, and generate public and private support for the initiative.”

“This is great news and I applaud Governor Murphy’s leadership in building this park,” said Congressman Donald M. Payne, Jr.  “This new park will create walking trails and biking trails to allow my constituents to enjoy nature throughout the 10th Congressional District.  As a strong supporter of the environment, I am proud that this park will protect miles of wetlands in northern New Jersey.  It is a great project and I look forward to seeing it built.”

Hudson County Executive Tom DeGise was also thrilled with today’s announcement, saying,
“The Greenway represents another critical element of our three-decade-long effort to increase open space, bike and pedestrian pathways, and public waterfront access in the region.  I am grateful to Governor Murphy for his leadership on this issue and his commitment to moving the Greenway forward.”

A press release from Governor Murphy’s office stated, “The new park will pass through a diverse landscape of existing parks and wetlands,  as well as urban, suburban, and industrial areas. The park will include walking paths, bike lanes, and other recreational uses, allowing visitors to take full advantage of a trail that exhibits the varied landscapes of our state including the scenery of the Meadowlands. Funding for the park will be provided through a collaborative effort by the Murphy Administration, including the support of the Department of Environmental Protection and NJ TRANSIT, the Legislature, and New Jersey’s congressional delegation, utilizing American Rescue Plan (ARP) funding. Over the past few years, NJ TRANSIT and the Open Space Institute have been engaged in negotiations with the Norfolk Southern Corporation for the purchase of this land, which will now be possible with the State’s support. The State’s acquisition of the land also allows its potential future use for mass transit purposes, alongside recreational uses.”