Congressman Donald Payne, Jr. has received another major endorsement in his bid to win the Democratic nomination for Congress in the 10th District in the upcoming June Primary election.  Today, Jersey City Mayor Steven Fulop announced his support for the Newark Democrat. 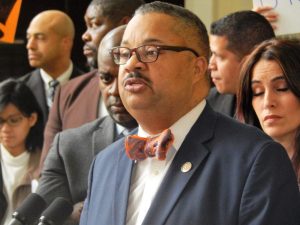 “Jersey City is experiencing an incredible amount of progress but we also have many challenges that we need help from the federal government to address, and that’s exactly why we need Congressman Payne to continue serving our community in Washington,” said Mayor Fulop. “From delivering direct federal funding for important public safety programs, to supporting programs like the CARES Act that helped Jersey City weather the COVID-19 pandemic, to his key role on major infrastructure projects that are essential to our region’s economic future, Congressman Payne has always gotten the job done for Jersey City and I’m proud to support him.”

Congressman Payne has represented portions of Jersey City since he was first elected in 2012. He has delivered numerous federal grants and programs to the community, including $3.5 million in emergency solutions funds for the Department of Housing and Urban Development in 2020, as well as millions of dollars in loan subsidies for affordable housing initiatives for seniors and disabled residents.

“Mayor Fulop and his team have done a tremendous job in revitalizing Jersey City and I’m proud to have his endorsement and support in this campaign,” said Congressman Payne. “Communities like Jersey City, Newark and others that make up the 10th District are full of hope and promise, but also struggles and challenges. It’s my mission to provide the federal resources and policies to help working class people in these cities thrive by lowering their costs for necessities like housing and health care while providing more economic opportunities, and I’m proud to partner with leaders like Mayor Fulop to make that happen.”

A lifelong Newark resident, Congressman Donald Payne, Jr., is a champion for working families, Democratic values and fighting to provide more opportunities for people in black and brown communities. He’s a devoted husband and father and a former union member with a blue collar background who has an immense respect for the dignity of work and the value of organized labor. A five-term Congressman, he was first elected in 2012 to succeed his late father, the legendary Rep. Donald Payne, Sr., who was the first Black Congressman in state history. Congressman Payne is Chairman of the Subcommittee on Railroads, Pipelines and Hazardous Materials in the powerful House Committee on Transportation and Infrastructure, which has jurisdiction over major infrastructure initiatives including the Gateway Project that are critical to New Jersey’s economy. Congressman Payne co-wrote the House version of President Joe Biden’s bipartisan infrastructure act and has supported critical progressive legislation like the Build Back Better plan, the George Floyd Justice in Policing Act, the Equality Act, the John Lewis Voting Rights Act and much more.